Greece is a popular holiday destination and several of its islands are attractive for tourists. One of them is the island of Samos, which in addition to the sun and sandy beach offers its visitors great wines and history associated with several important personalities. 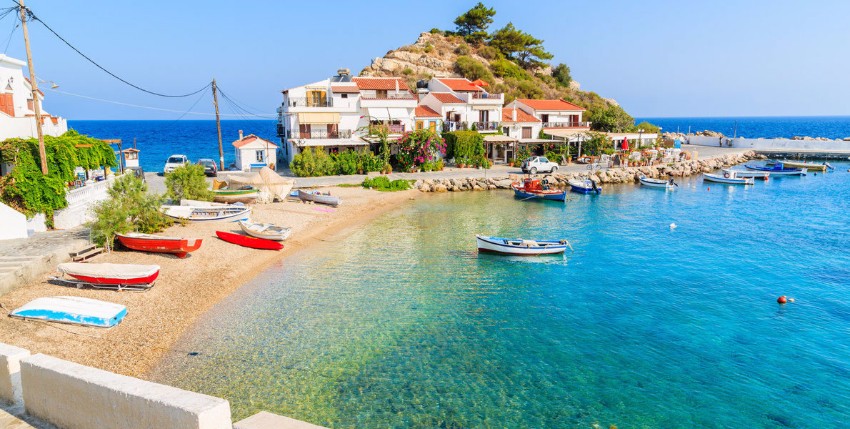 (Samos Island is one of the popular destinations in Greece)

The island of Samos is also called "green island"And is located in the eastern part of the Aegean Sea. The area of the island is about 476 km2 and has about 35,000 inhabitants. The island is therefore relatively large, with a variety of flora, figs and exotic fruits. Samos is also famous for its excellent nutmeg wines, which you must definitely taste on holiday. The capital of the island is the city and port of Samos. You will be enchanted mainly by its beautiful lagoons with perfectly clear water. From this resort you can also choose a trip to Turkey, which is a jump from here. 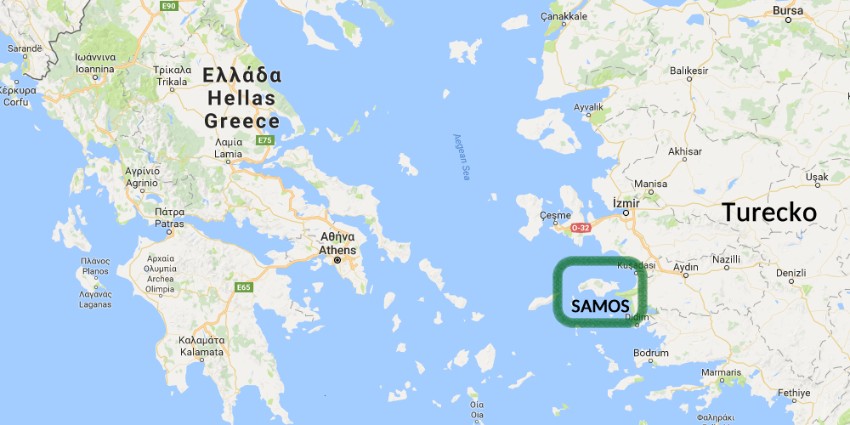 (Turkey is only a few kilometers from the island of Samos)

History of the island of Samos

The island of Samos was said to have been inhabited as early as 4,000 years before Christ, but the boom came in the 6th century BC. Like the whole of Greece, this island went through a period of rule of the Romans, Arabs, Turks and experienced Byzantine Empire. The island has belonged to Greece only since 1912. The capital Samos does not have a long history, as it was founded in 1832 and is located in the bay of Kólpos Vathéos. In addition to vines and olive trees, the island also stands out for its historic and architecturally significant buildings and narrow streets. In Samosu City Park you will find a room and a small church. Also worth noting is the old town hall, archeological finds, monasteries. The statue of a naked young man made of marble, which was created in 570-580 BC and with its height of 5 m, became the largest statue ever discovered in Greece. 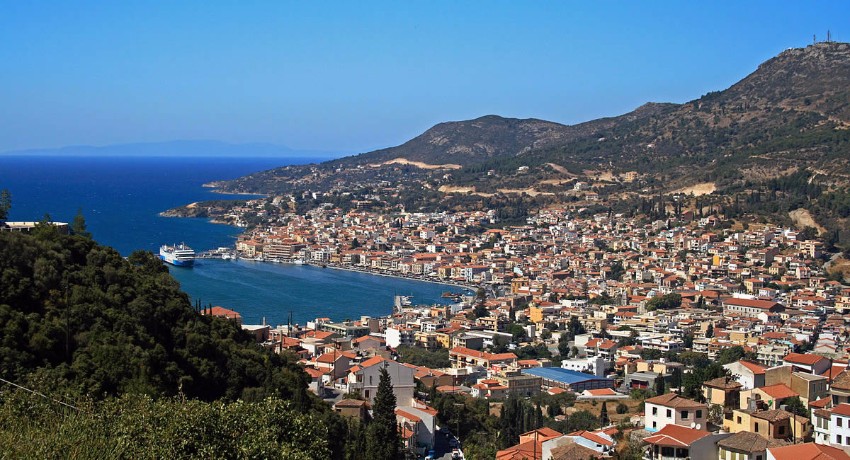 (The capital of the island - Samos has about 7,000 inhabitants)

Beaches on the island

You can enjoy swimming on Samos not only thanks to the clear sea and enchanting beaches, but also thanks to the pleasant climate and the long flight, which is hot and starts early. There are hundreds of beaches on the island, so you should go exploring and definitely not spend your entire vacation in just one place. In the northern part of the island are pebble beaches, otherwise there are mostly sandy beaches.

There are also car rentals on the island, so you can drive around the island and find a small hidden beach where you will have privacy. If you are looking for a beautiful beach that you never dreamed of, visit the beach of Tsopela or Psili Amos. Psili Amos is considered one of the most beautiful Greek beaches. For nudists there is the beach Tsamadou, for nature lovers the beaches Megalo Setani and Micro Setani, which are located in a nature reserve.

Interesting places on the island

The beautiful picturesque town of Kokkari is one of the jewels of the island of Samos. It is located on the coast and you can enjoy its fascinating pebble beaches and adrenaline water sports. Kokkari was founded in the 19th century and although there is a lively tourism, it still retains its original face. In addition to nice people, taverns, restaurants, bars and, of course, Greek cuisine await you here.

(Kokkari is a feast for the eyes and tongue)

Pythagorion is loved by tourists in the southeastern part of the island. If you suspect the city is named after the master Pythagoras, which enriched mathematics with Pythagoras' theorem. The city has an ancient pier and a port for 150 ships, which is one of the exceptional technical works of antiquity. The Polycrates Palace and the ruins of the Roman baths from this period have also been preserved here. The monastery and church of Panagía Spilianí are also close to the town. The church is built in a cave and hides the holy spring of Agiasma and the image of the Virgin Mary. 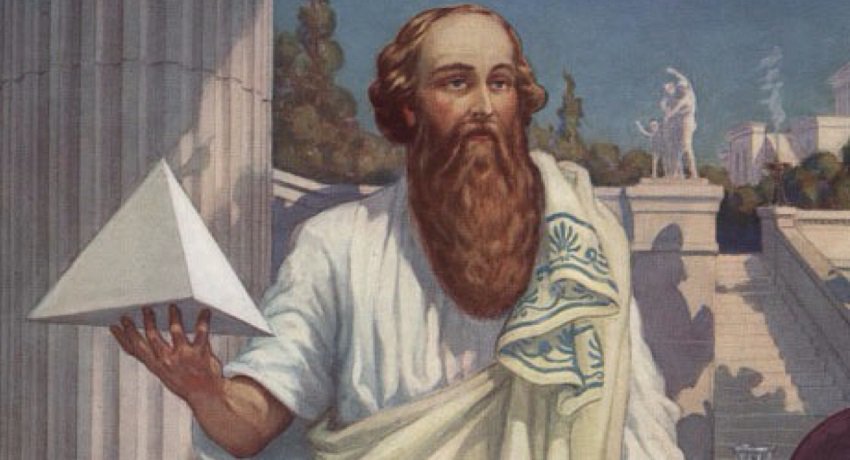 Also worth a visit is the complex of ancient excavations of Heraion near Pythagorian. The complex is connected to the city by the so-called a holy procession that is paved and in the past was lined with statues of gods. On Samos there is also an Eupalin water main with a length of 1,026 m and a height of about 1.8 m. Equally long and high is the tunnel through which water was brought to the city through the hill in the past. The tunnel is exceptional mainly because it was the first technical part of its kind in the world and even though it was dug from both sides at the same time, the deviation was only a few centimeters and the two roads met in the middle of the mountain. Sadly, however, this tunnel was the path by which the Turks conquered an otherwise impregnable city. 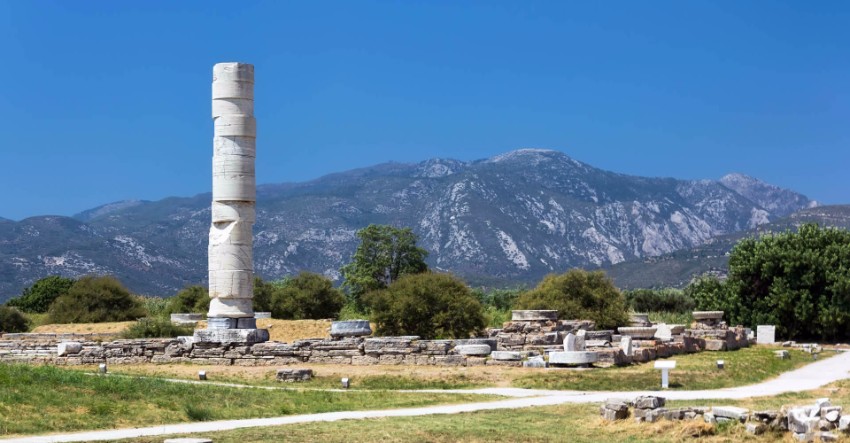 Turkey at your fingertips

The strait between Turkey and the island of Samos is about 2 km wide, so you have a view of the neighboring country from the island. You will not find luxury and large hotel complexes on the island, but you can take a trip to the coast of Asia Minor. The nearest Turkish resort of Kusadasi can be reached by ferry. There are mosques, historic buildings from the time of the Ottoman Empire, the former city walls and the pilgrimage site of Mareyman, where the Virgin Mary was supposed to die. The island of Samos will be a fascinating place for history lovers but for those looking for relaxation and sunshine on a sandy beach with clear water.

Holidays on the island of Samos